We all need a good critiquing every once in a while.

I got my first, hard look at what I was doing with a camera back in 1980. I was working as a teenage photojournalist at the Daily Clarion, and was pretty handy in the darkroom as well. The publisher of the paper was a man named Larry Hiatt, a large, imposing figure for a 17 year old, loud and opinionated. He was the newspaperman of lore.

He took to using a red wax marker and ‘pointing out’ errors that we made in the paper every day, typos, grammatical errors and such.

The day before I made a shot of some kids playing at a local bible school. I thought it particularly artistic and somehow convinced the editor to run it on one of the inside pages. It may have been artistic but it was apparently not photojournalistic. Which is why Mister Hiatt cut it out of the paper, marked it up with the red marker and left it taped to the door of the darkroom where I’d be sure to see it. And so would anyone else who walked by:

There was no sandwich of redeeming qualities to this critique. Three words just about covered it. Be artistic on your own time.

It may have been three of the most valuable words I ever received in critique. Because, yes - I am now artistic on my own time.

I’ve been critiqued in other areas of my life over the years as well.

In college when a professor selected the ones in the Radio/TV classes that would be successful in their choice of major, and which ones would leave the program (passed that one). 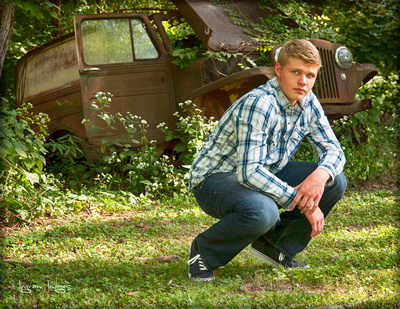 A few years later when I went to Oklahoma City in an attempt to be an air traffic controller - the director of the program very somberly predicted that he knew more than 80% of the people in the room would not finish successfully (I became a statistic).

I guess my point is - the biggest critique I or any other photographer could get is when someone gets out their checkbook. Whether I’m successful or not - the grade I will get is determined by the clients and friends who I work with.

If you fall into this category, thanks for your vote of confidence.

If you’d like to fall into this category, I look forward to working with you.